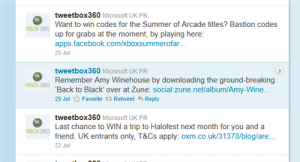 Microsoft apologised this week after an official Microsoft twitter account, Tweetbox360, tweeted a message urging people to pay tribute to the late Amy Winehouse by buying her music from their online store.
The tweet read, “Remember Amy Winehouse by downloading the ground-breaking ‘Back to Black’ over at Zune”
The mega-corp software company’s tweet was criticised as ‘cashing in’ and ‘massively insensitive’ by other tweeters which forced a tweet apology from Microsoft later in the day.
Microsoft’s money grabbing image has softened recently with founder Bill Gates setting up a foundation which is helping many people with sizeable donations along with many questioning Google’s ‘Do No Harm’ maxim, but today’s tweet

Using Twitter as a marketing tool and Social Media Marketing in general is still in its infancy and many companies still get it incredibly wrong.  In some cases the issue can be the limited character length of the tweet.
Phil Brassington, a director at web firm Rake Mark Solutions believes that gaff on twitter often come from the very short character limit. “If an initial idea for a tweet is shortened to fit the character limit it can lose its meaning, especially without emphasis of the voice that created it”
This is a great example of a company seeking publicity via a social media platform and making a complete hash of it.
The Staffordshire Web Designer said, “They’re not the first and they won’t be the last company to make a mess of their social media marketing”