Arghya Roychowdhury yesterday summed up how he felt when he and millions of other Twitter Users discovered that the Social Media Giant was, as we say “Offline”.

Mr Rawashdeh from Twitter described the day as “turbulent” and also announced that a ‘cascading bug’ was the culprit of the eventful day at Twitter HQ and speculation of hacking, the new office or Euro 2012 have been totally swashed by the team.

“For the past six months, we’ve enjoyed our highest marks for site reliability and stability ever: at least 99.96% and often 99.99%” reports Mr Rawashdeh. 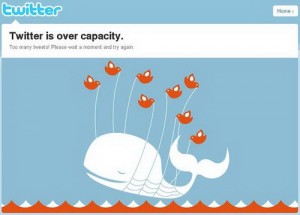 This is a far cry from days gone by when the “Overload Twitter whale” was a regular visitor to our screens.