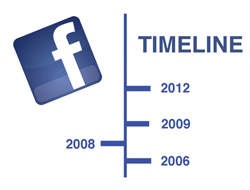 It has been almost 8 months since Facebook’s Mark Zuckerberg announced that they Social Media Facebook Website Design was being updated and they would soon be rolling out the redesign for all developer’s (at the time in beta) but users could also sign up if they wanted. Since then a lot of users (business and non-business) have been forced over to the updated ‘timeline’ version.

The design at the time was said to be “more nicely designed” and included the tile affect that was thought to make organization, archive and keeping up-to-date with friend recent activity even easier. Released at the same time was the “Cover” which in brief is the Large Image that you are given the opportunity to upload that is designed the assist in the individuality profile that Zuckerberg seems to be striving for.

Since then there has been much talk of likes, dislikes and quite a bit of reluctance to switch over so much so that I still know a few (and I mean 2 or 3 that’s all that is left) that have not been forced to the “Timeline Side”

Talking to our clients and friends we have found that some just simply don’t like change (what was wrong with the way it was before), some worry about the security and the mandatory, automatic ‘opt-in’ feature that the new Facebook Website Timeline has and some  don’t like the “re-jigging” and left/right column switches that goes on.

According to a Mashable survey done at the beginning of 2012 “79% of more than 1,500 voters wish that Facebook Timeline were optional.”

We think that this figure has most likely altered over the last few months, so we have decided to do our own survey and actually see what you guys think now.

We have popped a Facebook Poll up, go vote and let us know what you think, we’d love to know.

6 comments for “Have you switched to the ‘Timeline Side’”