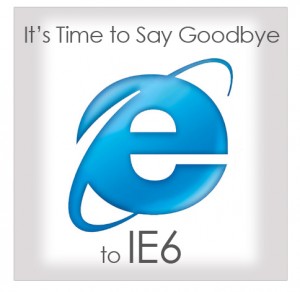 The Microsoft micro site launch is almost 1 year ago exactly from when the flood of announcements came that IE6 had died.  Techie funerals were held and even flowers were sent to say a final goodbye to the trusty browser. In one of the many hundreds of articles on the subject it was written, “It’s going to be a hard sucker to kill. But at least a funeral will provide some closure until we find the body.” It couldn’t have been more accurate.
The new ‘Internet Explorer 6 Countdown website states, “This website is dedicated to watching Internet Explorer 6 usage drop to less than 1% worldwide, so more websites can choose to drop support for Internet Explorer 6, saving hours of work for web developers.”

Sarah Brassington, from Rake Mark Solutions, told us that IE6 support is still requested within many projects. “Rake Mark continue to write websites and web applications with IE6 support, in fact this is mandatory when the project is for the government or the NHS”, said Mrs Brassington
And IE6 is going to be around for some time to come, but it can come at a cost. Mrs Brassington said, “Support for IE6 will continue at Rake Mark as long as there is a demand from our clients, but it can add to the cost of a project”

Microsoft’s problem with trying to kill off the IE6 Browser is that, it may be old but, according to figures by Net Applications, still holds a global market share of 12 per cent. This, coupled with the UK governments continued commitment to retaining IE6 due to the reported high cost, running into the millions, of a switch over to an updated web browser.
The ‘Stand Firm’ 12 percent of both individual and company users continue with IE6 despite the massive security flaws of an aging browser and with the knowledge that Microsoft no longer offers support, so shifting them over to an upgrade may well be near impossible