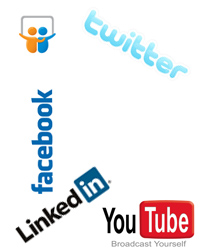 Ok, so by now we have all heard about Social Media how it works, how much time it takes and what’s involved, but maximising time for such web Marketing remains a challenge.
We were brain storming the other day during a meeting on how we could increase our productivity within the company’s networking activity. How we could still be active on our twitter, Facebook, LinkedIn and blog accounts while:

Here are some of the suggestions that we came up with and thought we would share them:

← 5 Quick Selling Tips, From Your Web Developer?
Asking for Testimonials for Your Website →